When you’re new to vegetable gardening the easiest way to get started is to buy some seedlings from a garden centre and plant them out. However the range of things to plant and the varieties available are very limiting, so sowing from seed is the way to go. There are many organic seed companies that you can order from online, or you may have a gardening friend who saves their own seed and is happy to share some with you. Beware though, looking through seed catalogues is addictive and often results in you buying more seeds than you have space for in the garden!

Here is my guide for some common vegetables and how best to sow them:

Seeds that should be sown directly into a garden bed:

Seeds that are best sown into seedling punnets and planted out as seedlings:

Seeds that can either be sown direct or into seedling punnets first:

It’s also important to plant seeds at the correct depth, generally 2 to 3 times their width. Keep soil moist after planting but not soggy; if you let the soil dry out after the seed germinates it will die, if the soil is too wet the seed may rot before it even starts to grow. And remember to sow your seeds in their correct season!

Sowing peas directly in the ground 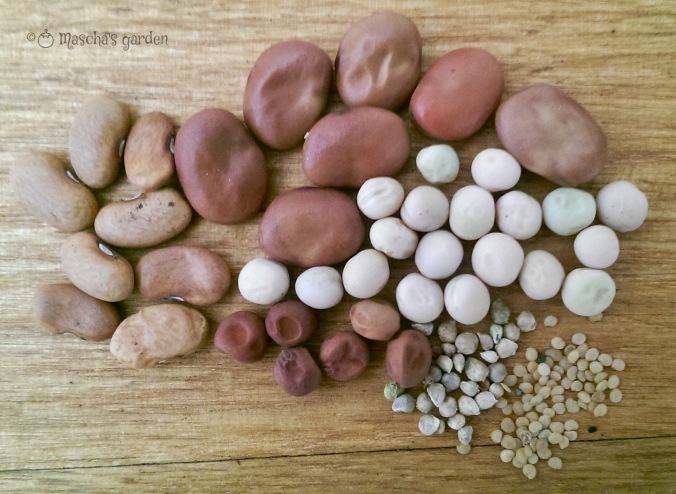 To start with a seed…that you plant into the soil and nurture as you watch it grow into a plant…then to harvest from this plant food to feed yourself and your family and friends… then to save some of the seed to start the cycle again the following season…this would have to be one of the most satisfying, rewarding and empowering experiences you can have.

There is so much to write about seeds so in this post I’m concentrating on highlighting some of the different types of seed you may come across and what some of the terminology on your purchased seed packet means. I’ll follow on from this with a post at a future date which will cover: how to sow seeds successfully and another on how to save your own seed.

Seeds can be classified into Open-pollinated, Heirloom, Hybrid and Genetically Modified.

Open-pollinated seeds are from plants in which pollination occurs by insect, bird, wind, humans, or other natural mechanisms. This means that if you want to save your own seed, these seeds will be true to type (produce very similar characteristics as their parent plants), as long as they are not crossed with other similar varieties of the same species. They also produce exceptionally tasty crops that have a staggered maturing time (great for successive harvest in a home vegetable garden). The only down side is that some varieties produce less bountiful crops. However if you save your seed from your strongest plants from each crop, over time you’ll start to get seed that is adapted to your local soil and climate and produce better plants each season.

Heirloom seeds are all open-pollinated but are also seeds that have a history of being passed down within a family or by a community.

A bright selection of heirloom tomatoes bursting with flavour.

Hybrid seeds are seed that have resulted from cross-pollinating plants. This can happen naturally in nature, but has been taken to the next level in modern agriculture where plants with specific desirable characteristics are cross-pollinated over many generations to produce highly inbred new hybrids. These hybrid seeds are specifically favoured in modern agriculture, mainly for their high and often earlier yield times, disease resistance and general uniformity in harvesting times. The down side is you can’t save seeds from hybrids as the seeds you save will generally not breed true and revert to the parents’ traits. The popularity of hybrids has also meant the loss of many heirloom varieties and a loss in the diversity of food crops for future generations.

Genetically Modified seeds are produced in laboratories by combining the genes from one species with that of another (think chicken genes in wheat and rat genes in soybeans!) to produce seed with herbicide resistance or other desirable traits. These genetically modified seeds would never naturally occur in nature and the health and environmental impacts these seeds pose are enormous. Most GM crops also contain terminator genes which means seeds are sterile and farmers are required to purchase new seed each year from the companies that own the patent rights for them. Luckily GM seeds are not (yet) available to home food growers but their use in major agricultural crops such as wheat, corn, canola, cotton and soybeans and the inconsistency in labelling on food products means we may all have consumed GMO’s at some time without realising it.

Treated seed has to be labelled as such on the packet you buy it in and is usually covered in a bright pink or blue fungicide or pesticide dust or coating. These coatings are restricted to those seeds which are particularly susceptible to attack by soil borne fungus or insect damage in the pre-germination stage. Vegetables that often have treated seeds include corn, beans, peas, pumpkins, squash and cucumbers. Some seeds are treated with neonicotinoids, a group of chemicals which can be absorbed by the whole plant and are potentially carcinogenic and can make the pollen from the plant toxic to bees who forage on the flowers. When the seed packet warns ‘not to eat the seed or feed to animals’, would you even want to plant them in your garden and eat the vegetables grown from them?

Certified Organic seed is produced using organic farming practices and standards allowable by an organic certifying regulator. These seeds are always non GM and untreated. They are the best seeds to buy to ensure you minimise your exposure to harmful chemicals while also supporting farming practises which minimise harm to our natural environment.